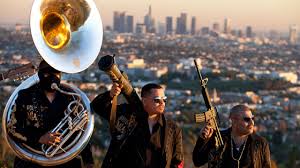 The film Narco Cultura, that premiered a few weeks ago,  shows us an ambiguous image of the Mexican drug war that takes place in the Mexican city Ciudad Juárez, one of the most dangerous cities in the world, in which in 2010, 3623 murders were committed. On one side we see the all the killings, blood, violence and despairing relatives of the victims and on the other side we see The United States, where the drugs lords are being eulogized in gangster raps.

In the documentary we follow Richard Soto,  a forensic investigator in Ciudad Juárez, where the Mexican drug war is at its peak. Every day Soto collects numerous of lifeless bodies from the people that were killed. This make him hate the violent city, which he also loves so dearly. “The only way I can help this city is through my work,” Soto mentions in the film. Besides finding dead bodies, he also loses more and more of his colleagues who have become the victims of murderous drug lords. Every day it becomes clearer to Richard how much danger he runs himself.

Meanwhile, in the United States, a subculture is developing itself very rapidly. Rappers sing about the life of drug lords and this Mexican version of gangster rap, narcorridos, is getting more and more popular in the United States. It is even called the `new hip hop´. The songs represent a macabre version of the American dream; the drug trade as a key to fame and success  and as an escape from poverty. Everybody know it´s bad, but they see it as a way of living.

Narco cultura is an impressive film that you will not soon forget. It’s really worth seeing! Watch the official trailer here.